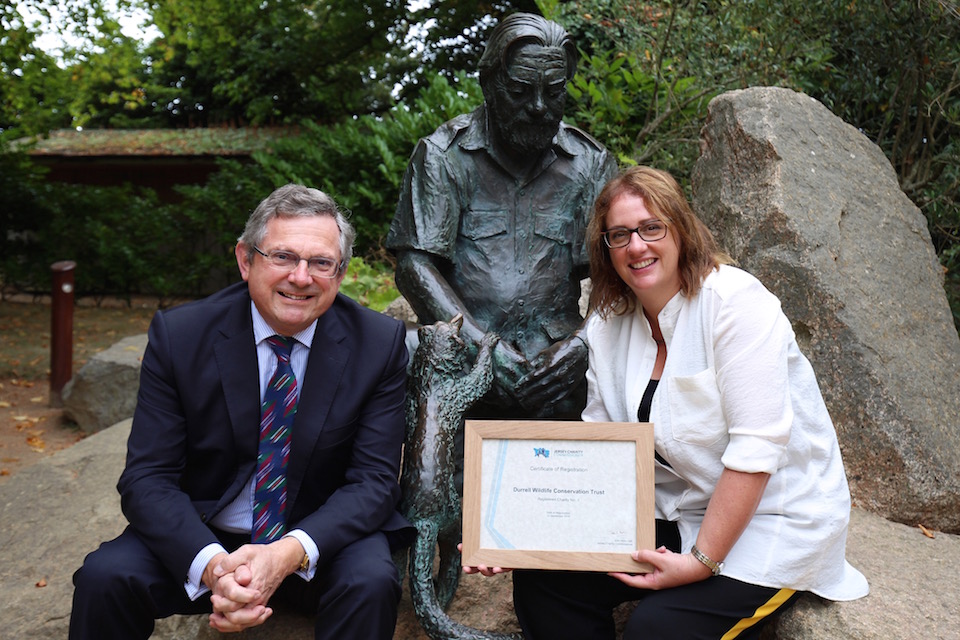 The new regulatory regime commenced in earnest on the 1st May 2018 when organisations started applying to the Commissioner for registration as Jersey Charities. In the first four months since the online application process opened, nearly 200 organisations have created online applications with 50 submitting them for approval by the Commissioner. Durrell Wildlife Conservation Trust is the first charity to gain approval and as such, will be posted on the public register of charities which the public will be able to view via the Commissioner’s website at charitycommissioner.je

“I am delighted to be able to present the Durrell Wildlife Conservation Trust with their certificate of registration as Jersey’s first Registered Charity. The important work of the Trust in the advancement of environmental protection is known across the globe and they can now add being the “number one” charity on the register to their long list of accolades in supporting endangered species around the world”

“It is a huge honour for Durrell to be recognized as the first registered charity in Jersey. This island has been Durrell’s home for nearly sixty years and this recognition of our charitable work allows us to continue our vital mission of saving species from extinction. I would also like to thank all our visitors, members, donors and supporters who believe in our vision for creating a wilder, healthier more colourful world.”

In relation to the registration process, Mr Mills added:

“In the coming days, I will be approving a number of other charities but today was an excellent opportunity to celebrate our first registration. We are currently in dialogue with a number of applicants to help them with their application. It is important to note that there is no rush as there will be no impact on the current tax reliefs enjoyed by any charity in the short term provided that it has applied for registration by the end of 2018 even if that registration has not been determined by the end of the year. Subject to that, such an organisation’s continuing entitlement to preferential tax arrangements will depend upon whether or not it has successfully become a registered charity, which I shall have certified to the Comptroller of Taxes.”

From 2019, being a registered charity will be the only means by which an entity now describing itself thus will be entitled to continue doing that, and, subject to some transitional provisions , continue to obtain all the tax reliefs afforded to charities.

The charity register will contain key information about each charity and, with some limited exceptions, will be fully open to public inspection so that people can if they wish understand more about the purposes, finances and public benefit delivery of the charities that they may wish to support.

Members of the media are invited to come along to Jersey Zoo to take photos and / or film on Wednesday 12th September. The presentation will start at 2pm.

Established by author and conservationist, Gerald Durrell, in 1959, Durrell’s overall aim is for more diverse, beautiful and resilient natural landscapes in which species can thrive and people can enjoy a deeper connection with nature. Their approach concentrates on the rewilding of animals, the rewilding of ecosystems and the rewilding of people.